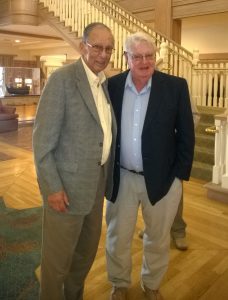 Among the retirees in attendance were Bill Bischoff, former Vice Chairman and Bob Prais, former production manager who is now the Retiree Club President–Space Coast Chapter. In the late 1970s, Vin worked with these gentlemen on many of the legacy Grumman programs including the Apollo Lunar Module (LEM) and F-14 Tomcat programs. Vin worked under Bill, who was chief of design for the LEM program, designing the Lunar Module heat shielding on the aft equipment bay. Vin also worked with Bob (shown together left) who was in manufacturing during the development of the F-14. Vin’s work included the design for a one-piece titanium fitting with upper and lower bearings for the swept wing pivot which was crucial to the aircraft’s capability. This innovative fitting allowed the wings of the F-14 to imitate the movements of a bird’s wings as it glides through the air. At low speed, the wings could sweep forward for maneuverability during aircraft carrier landings. They could also sweep back for high speed performance during combat as was depicted in the motion picture, Top Gun.

Also in attendance were longtime colleagues Kevin Dembinski, George Lambert, and Lou Ridell from Grumman’s Commercial Aircraft Division plant in Stuart, Florida. Vin worked with them on desiging the Boeing 737 flaps, the 767 wing center section and doors, the 777 flaps and ailerons, the 747 doors and rudder, and the Gulfstream G450 nacelles. 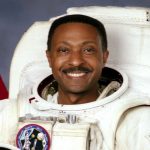 Winston Scott – Pilot & Astronaut
The keynote speaker for the afternoon was former F-14 pilot and astronaut, Winston Scott (shown left). In his presentation, he shared several stories with the audience regarding his time as a Navy pilot flying numerous aircraft carrier missions. He conveyed his intimate knowledge of the F-14 as well as his appreciation for its design, capability, and performance. Mr. Scott also shared his experiences in NASA’s space program on shuttle missions such as space walks with the purpose of deploying or retrieving and repairing satellites. He spoke to several key accomplishments of Northrop Grumman in the history of the space program, including building of the lunar module for the Apollo missions as well as the construction of the space shuttle’s wings.

After the presentation, some of the retirees reflected on the trials and tribulations during their time in what they called the Grumman “Iron Works” when these major programs were underway. Their stories interested and inspired the younger generation in attendance as they depicted how challenges were overcome and goals were achieved through the ingenuity and innovative thinking of the Grumman team.